I was an early adopter of LinkedIn and about 10 years ago I had a lot of success in networking, building leads, and developing a presence on LinkedIn. In an effort recently to network more and stay more “alive” on the web, I dusted off my LinkedIn profile and was, frankly, horrified at what I saw. Once I was more established in my professional path, I dropped down to only using LinkedIn to accept connections. About a week ago I decided to start using the platform again to see if I can drum up some new connections, tap into old ones, and live their mission of “connecting all the professionals around the world to make them more productive and successful.”

I could not disagree more. I think that LinkedIns motto should now be “we are basically Facebook, except you get to see people you are supposed to be connected with professionally acting a fool politically. Oh, and enjoy your inbox full of 8 spam messages a day from random software companies trying to sell you their services.”

Here is some of the stuff you probably have in your inbox too: 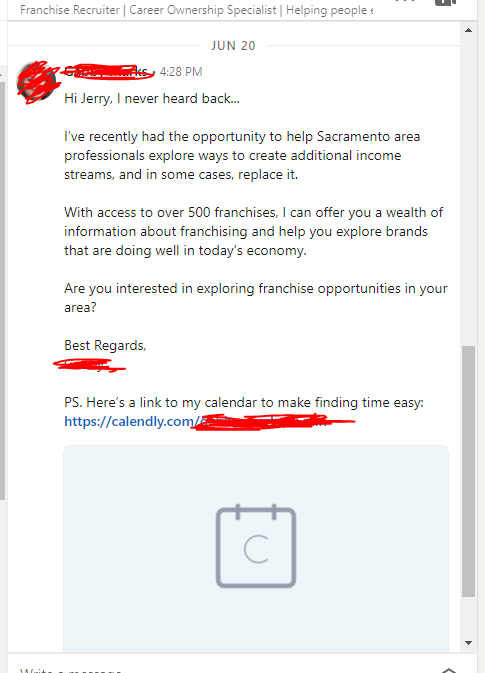 One of the first articles I ever had ranked #1 for international SEO years back was an article on how to write a compelling LinkedIn summary! As I grew in connections and throughout the years to more executive level roles and companies, the amount of spam I received overtook any true meaning of networking on the platform. LinkedIn, like others before it, seems to have turned into a platform where people just spam their links. LinkedIn, in the beginning, was a great tool to connect with people. Now, it’s a spam garden full of misspelled, grunt requests from software houses that are looking to sell you services. People like Lewis Howes who made their name using LinkedIn, suddenly seem to rely on Facebook or Podcasts to continue to grow their networks.

Is there any salvaging of this network?

When NX hired a similar sales firm to do LinkedIn outreach, we barely got any traction.  Our ads looked similar to the ones above, where it was just a raw cold intrusion on someone’s inbox. The leads we did get were small and not well targeted. Their sales messages were, like the above, similar to a brochure you might receive in the traditional mail. To me, this isn’t the best way to go about doing sales or engaging with people in networking and relationship building.

I don’t know what creates these cycles of redundancy. When I first used MySpace to market my bands 15 – 16 years ago, the same dilemma befell MySpace. They opened up their network to prioritize spam, just like LinkedIn is doing now, and fell apart. You would log in (at the end of MySpace) and have 7 or 8 new requests or ads from bands, musicians, and other intrusions in your inbox. Opening LinkedIn again gave me a sad feeling of where it was headed.

On a regular basis, I get emails or messaged from people who are trying to do big things. They are convinced they have some multi-trillion dollar idea, the perfect pitch, some brilliant concept. They also are convinced it will be a success (“I just need you to build my app for me”). It’s always fascinating to see the certainty and intrusion this is based on, because it almost always turns out to be nothing. It’s wishful thinking. Like my examples above, they were so convinced that once I opened the message, I would be enthralled by whatever they had to offer.

Much like all novice thinking, people aren’t doing the hard part, the work. They think they can send out a few hundred of these email blasts on LinkedIn, post nothing but links to their lead page, and expect great results. They don’t seem to realize (or care) that people like me get tons of these every day. They haven’t even tried to build any value, they are basically just like, “hey look at how awesome my stuff is. Buy it! You know you want it!”

For example, 5 minutes of research on my LinkedIn profile would have found that I do exactly what these guys are trying to sell me. 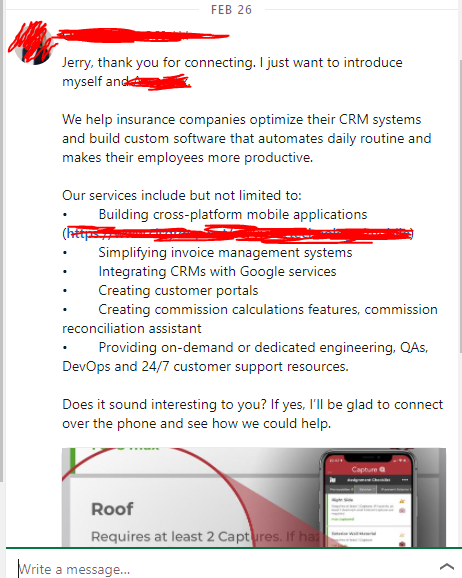 Amongst other things, I have hired and trained developers to take over CRM systems like Salesforce, I’ve built custom CRM systems, and do everything they have in their message. This company basically found out that I have an executive title at an insurance company, and decided to spam me. They didn’t try and build a relationship, they didn’t even bother to read my profile. They either purchased some list, or hired a company like NX did to purchase a list without anyone vetting it.

I decided to do something different. I went through and cleaned out the gunk. My intention was that I could focus on only groups and connections I could actually benefit from. It was a grueling process, and I’ll have to report how it works for me. I went through my inbox and removed anyone who instantly tried to sell me when I connected with them. I also went through my feed and every time I saw a political post or non-workforce type post I removed that person. The amount of political/non-work related items proliferating on LinkedIn is crazy.

Once I cleaned up the inbox and my connections, I was able to re-engage with old contacts and get a couple of software development leads out of it. I think that, much like most networks now, the practices of things like Digital Minimalism will be more true than ever. The only way to succeed on these platforms is to hyper focus on a specific people, to be social, and to not even try these spam techniques. On the first day I got two legit leads for NX, one of which wasn’t a good fit and the other signed a contract shortly thereafter.

Doing the work and actually spending the time to get in there and build real leads, work with their needs, and solve their problems is a lot more difficult than just spamming out email messages. While LinkedIn has catered towards these people, you can still stand out and use tools like LinkedIn to get what you need out of them. You just have to be willing to actually roll up your sleeves and get a little dirty.

I am a technology executive specializing in all things computer programming and technology consulting with focuses on the insurance industry, I talk about things like outsource management, networking, big data, AI, automation, and database design.